Why is it hot during the day and cold at night in the desert? 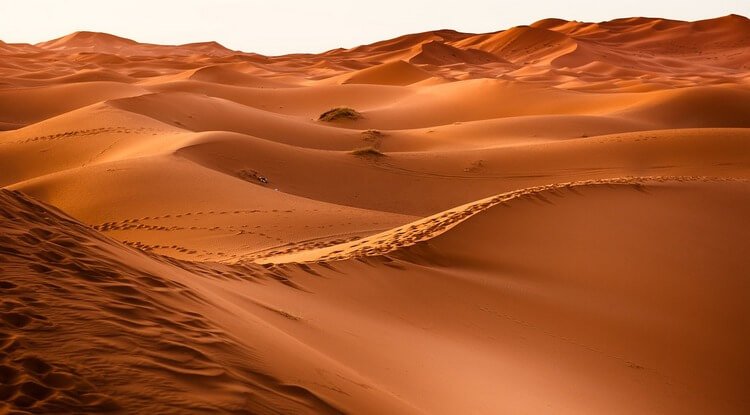 Hot deserts are mostly found in the intertropical zone, where sunshine is at its maximum. The Sahel, for example, receives more than 3,200 hours of sunlight per year, while Paris, for instance, receives barely half that. The sun in deserts is omnipresent, heating the ground and the surrounding air. Because of that, the temperatures are very high, as well as the evaporation. In summer, in the Sahara, the average temperature is 40°C, and it drops to 20°C in winter.

The thermal amplitude of the desert

The desert cools down cruelly at night if it is hot during the day, and it can even freeze in winter. The thermal amplitude day-night can easily be higher than 20 °C. This drop in temperature at night is explained by two main factors: the heat capacity of the sand and the clouds.

Sand is composed of silicates that retain the heat accumulated during the day particularly poorly. As soon as the sun disappears, each grain of sand isolates itself from the others, thus accelerating thermal dissipation. In other words, the sandier the desert, the faster it loses the energy accumulated during the day.
Moreover, the nights are clear, and the absence of water vapor in the air considerably inhibits the formation of clouds. The ground's infrared radiation is sent directly toward space without this natural barrier. Solar radiation is the only heating in a hot desert in the intertropical zone.

Diamonds - how they were formed on Earth?

Cryptocurrency: what is the difference between a coin and a token?