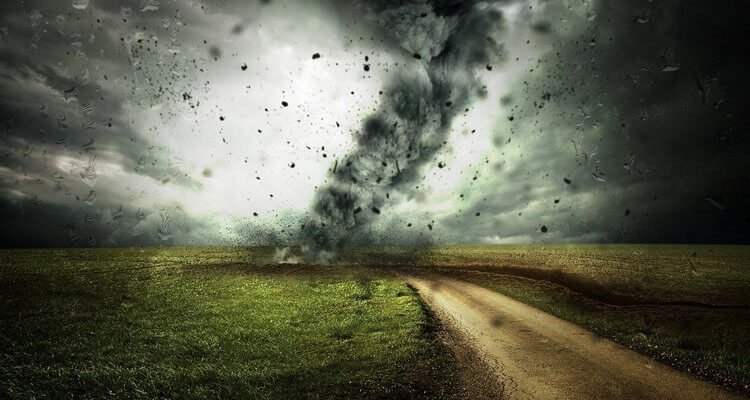 Tornadoe - an ultra-violent whirlwind on earth

Tornadoes are the most violent wind systems on the planet, with winds exceeding 300 km/h. A tornado must form under a thunderstorm: this small terrestrial vortex is a rotating column of air that extends from the base of a thundercloud to the ground. To be called a tornado, the whirlwind must make contact with the ground. If this tornado forms in the middle of a thunderstorm at sea, it is called a waterspout.

In order for a tornado to form, a thunderstorm must first develop, which occurs when humid air meets cold air: the meeting of the two causes significant instability in the atmosphere, resulting in powerful thunderstorms, known as super-cells. Super-cell thunderstorms produce the most violent tornadoes, particularly in the United States, which are the most affected by tornadoes.

When compared to hurricanes, a tornado is a much more localized event. The tornado's width ranges from a few meters to four kilometres. Still, it can move hundreds of meters in a matter of seconds or tens of kilometres in a matter of hours.

Tornadoes are graded using the Enhanced Fujita Scale (EF for Enhanced Fujita, in English), which ranges from EF0 (swirling winds up to 130 km/h) to EF5 (more than 322 km/h).

Hurricane - a tropical phenomenon that forms at sea.

Hurricane forms in the ocean; it is a vast phenomenon that can extend from 300 to more than 800 kilometres and cover a large area, but it depletes quickly once it reaches the coasts. The hurricane produces heavy rain and strong winds: the rains and rise in sea level pose far more of a threat to the human population than the winds. Heavy rains frequently cause floods and last for several days. In contrast, violent winds are concentrated primarily on the coasts and rarely reach the land.

The hurricane is a cyclonic phenomenon. It begins with an area of instability that forms above tropical and subtropical waters. The heat of the ocean is required for the formation of a cyclonic phenomenon; it is the primary fuel that provides its energy. This usually necessitates a water temperature of at least 27°C, but the warmer the water, the greater the risk of cyclonic phenomena. The tropical depression is the first stage of formation; the phenomenon then intensifies into a tropical storm and, finally, into a cyclone, known as a hurricane in the North Atlantic. It then rotates in a circular motion. The hurricane's intensity is classified using the Saffir-Simpson scale, which ranges from category 1 (119 to 153 km/h) to category 5 (over 251 km/h).

While the North Atlantic experiences about 10 hurricanes per year, the United States experiences more than 1,000 tornadoes each year. The majority of tornadoes occur in the United States during tornado and thunderstorm season, which runs from February to June. In contrast, hurricanes form during the Atlantic hurricane season, which runs from June to November.

Even though the phenomena of hurricanes and tornadoes are very distinct, there is a link between them: the hurricane's instability generates storms around it, and thus tornadoes under these storms. Tornadoes do not always occur during a hurricane but rather a few days to a few hours before the hurricane makes landfall.